Will Chinatown ever be the same again?

Since the pandemic hit Singapore’s shores nearly a year ago, Singapore’s retail scene has struggled to stay afloat. Besides February, which saw a spike in sales due to the Lunar New Year festivities, retail sales have seen a year-on-year decline every month for the past year. For areas reliant on tourist footfall, the sharp plunge in tourist numbers – by 85.7 per cent, from 18.5 million in 2019 to 2.7 million last year, has dealt a huge blow. One such area is Chinatown, a tourist hotspot prior to the pandemic. TheHomeGround Asia speaks with business owners in the Chinatown area to understand how the pandemic has affected sales and the struggles they continue to face, one year on.

NOTE: Interviews were primarily conducted in Mandarin and have been translated.

The streets of Chinatown are nothing like they used to be. Friends Alan Lee and Mr Yap, who visited Chinatown up to twice a week prior to the pandemic, share that many retail and food stores have shut since the pandemic.

When TheHomeGround Asia visited Chinatown on a weekday afternoon, many shops were shuttered for the day. Some were missing signboards, indicating that the tenants have left. The area, once bustling with tourists and locals at any given time of the day, now sees the sporadic gathering of seniors who live nearby chit-chatting at the hawker centre, shopping for food, or engaging in a game of Chinese chess.

When asked about how business has been Ms Lee, an antiques shop owner, points to the deserted streets outside, as if that was the only explanation required.

Upon further probing, she elaborates, “Business has been bad, very bad. It’s pretty much been zero [sales]. Things haven’t gotten better at all. Locals don’t really purchase [our goods], most of our customers [in the past] were tourists.”

Her sentiments are unanimously echoed by other vendors, although to varying degrees.

Mr Ong, who owns an aquarium shop near Chinatown Complex, says that business has declined even though his customers were primarily local. He explains that since many shops shutter early due to the lack of tourist footfall, this has caused overall foot traffic to drop, even from local shoppers.

Owner of family-owned business Hai Seng Porcelain, Kenneth Ng, concurs. Prior to the pandemic, tourists accounted for 15 to 20 per cent of sales, but this has not left Mr Ng immune to its impact.

“We serve mainly locals but because there’s no tourists, that means there’s no crowd,” he explains, citing the same reason as Mr Ong for how one impacts the other.

A vegetable seller at Chinatown Complex wet market, who did not want to be named, also reports a fall in customers since the pandemic started.

“They restrict entry into the wet market, forcing people to queue. People queue one time, scared already, don’t want to come back,” she shares.

Even businesses who rely primarily on local customers have suffered. Mr Huang, who sells Chinese-style handicrafts and antiques at Chinatown Complex, reports that his regular customers are more reluctant to purchase from him during the pandemic due to the economic uncertainty.

But while a drop in customers is unsurprising with pandemic restrictions in place, Mr Ng points out that the supply chain has also been affected.

“Nowadays, we cannot get our items from overseas as conveniently as before,” he says. “Shipment costs, everything increased. In China, during that period [when the pandemic was at its peak], the factory was not open, then we cannot get our goods also… So even though retail is open, there’s a period of time when there’s nothing for us to sell.”

For Ms Lee, it is her unit’s lease that proves to be the real thorn in her side, forcing her to keep her shop open even though business has been in the dumps: “We can’t go on anymore but we have a deposit, so we have no choice but to hang on. We paid three years worth of deposit, if we stop our operations, we have to forfeit the deposit.”

Mr Huang confirms that steep rentals have been an issue for many vendors: “Many of the vendors I know here, they have closed down because rental is too expensive… The pandemic has already been going on for more than a year, if it keeps going on this way, the rental cost piles up very quickly, they will have no choice but to give up.”

Manpower is another concern for aquarium shop owner Mr Ong: “For businesses like mine, we need to hire more staff, but we can no longer afford it. The wages are too expensive.”

But even finding workers has been hard, especially as he wants to hire younger workers who are more technologically savvy and can help him set up an e-shop: “It’s so hot, why would young people want to work here? They prefer working in offices. Plus, the hours are long.”

To aid Chinatown vendors in their efforts to digitalise and grow revenue as footfall dwindled with the pandemic, the Infocomm Media Development Authority, Enterprise Singapore, and Singapore Tourism Board set up the Chinatown Digitalisation Committee, last July.

Last month, the committee announced initial collaborations with online reservation platform Chope and retail site Qoo10 to develop digital initiatives. The two companies will support digital marketing, outreach, onboarding, and training for interested businesses. Measures to drive foot traffic to the precinct include dining deals, and the option for Qoo10 customers to pick up their purchases in-store from Chinatown vendors.

But Mr Ng thinks that digitalisation is only effective to a point, as senior citizens make up a significant proportion of visitors and still prefer the physical retail experience.

Like Mr Ong, Mr Ng says that shifting from physical retail to e-commerce is not easy even with government help, especially for small businesses like theirs.

“For retail, it’s quite difficult… there’s a lot of small items, and we don’t have a team to set up, take pictures, [list] the items, then publish,” he explains. “Though the Government subsidises [digitalisation efforts], it’s only on the website. The photo-taking, that kind of thing, we still got to manage by ourselves.”

Still, he acknowledges that digital advertising has helped his family business to create awareness about his store to prospective customers.

A loss of tradition and local heritage

Shoppers are not the only thing Chinatown has lost during the pandemic. Vendors also despair over the continued loss of local traditions and heritage in the area, an issue that has exacerbated in the past year.

Mr Huang recounts the Chinatown of his childhood filled with vibrant streets, uproarious festivals and regular opera shows. He rues how Chinatown Complex today is a mere shadow of its past; shops now close by 7pm, and there is much less to do and see.

“Chinatown is finished,” Ms Lee states. “In the past, there were many traditional businesses, but now, they’ve all been replaced by bars, eateries, and the likes.”

After operating for more than 20 years, her business may well be one such casualty. She bemoans, “It’s impossible for [my business] to recover. Next time when you come back, you will find ‘Ah, this auntie has also left.’”

It was a joyous day on the track and field for Team Singapore at the Manahan International Stadium in the...

The Padang, a 4.3-hectare patch of green in front of the former City Hall building, has been named Singapore’s 75th. 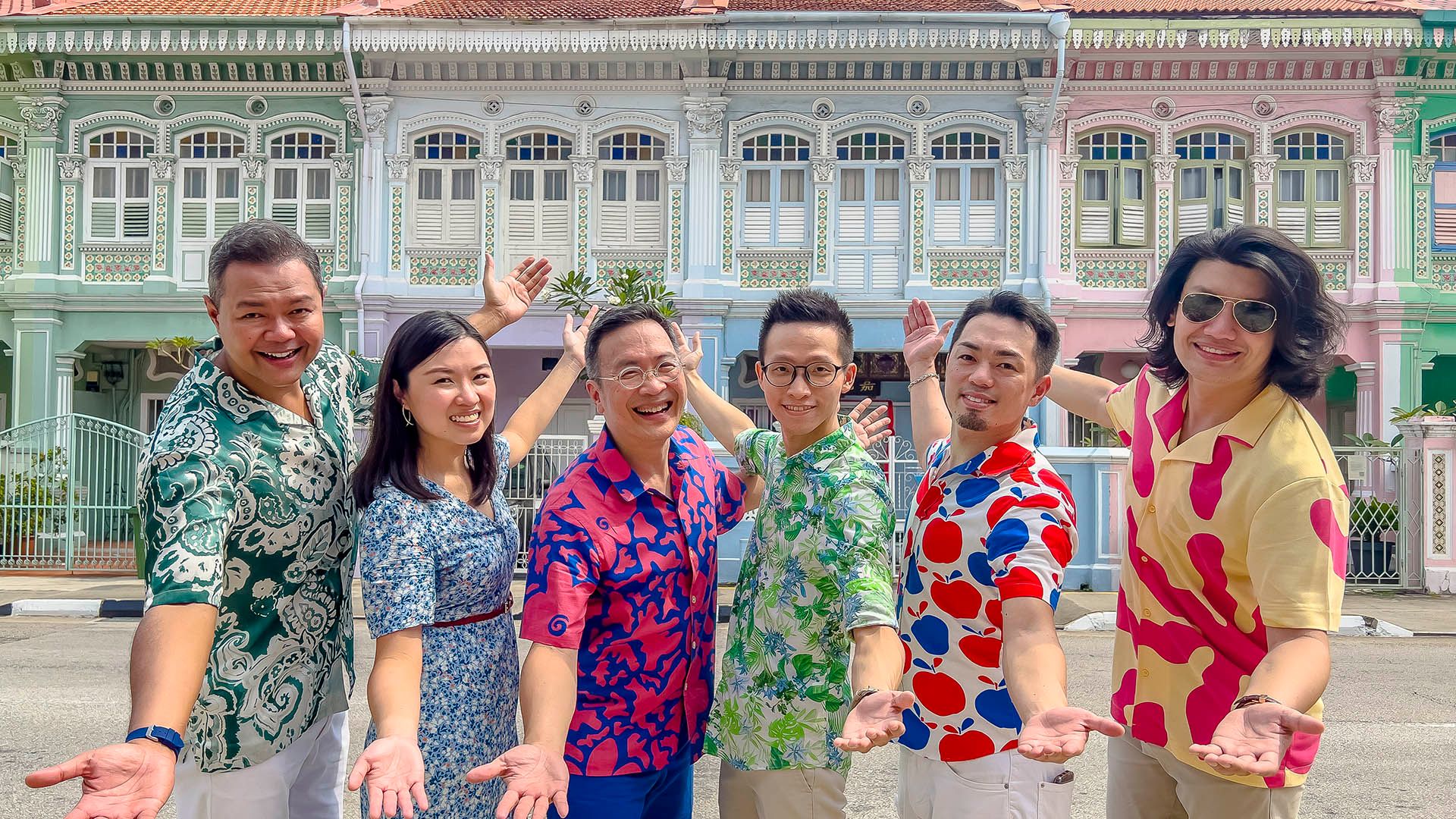 A National Day song about Katong, a place that everyone knows and lovesWhile the rest of Singapore is singing national songs in celebration of the 57th National Day, acapella group Vocaluptuous decided to go totally local. “We…
9 Aug 2022 5 mins read